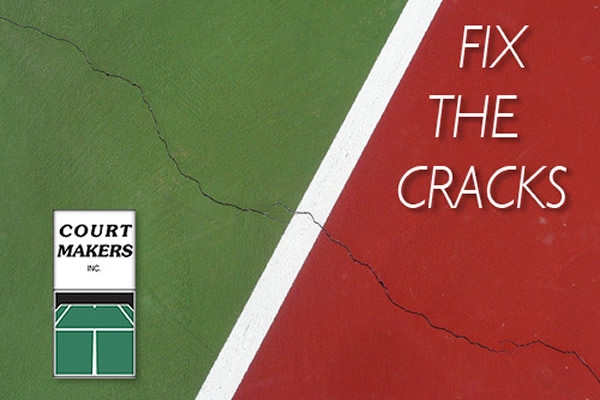 Whether you have hard or soft courts, they’ll eventually need work. How do you know what your courts really need?

No matter how well built your court is, eventually it’s going to show its age. In a hard court, that might mean cracks, worn spots or uneven areas. A soft court (clay or fast-dry) might have areas where surfacing is thin or irregular.

Problem is, you’ve asked for advice from a few of your colleagues who went through this not too long ago with their courts. It turns out that one person’s courts needed recoating. Another needed an overlay, while the third required total reconstruction.

How do you know what your court really needs? How do you avoid being oversold and get the best value for your money? Basically, say tennis court builders, it helps to have an understanding of how a tennis court is constructed and how it wears.

According to one industry poll, more than 70 percent of the tennis courts in the U.S. are hard courts — asphalt or concrete pavements with an acrylic surface coating system. Asphalt courts make up the majority of all hard courts. Asphalt is a flexible pavement, able to “give” slightly with ground movement due to settling or freeze/thaw cycles. As it ages and weathers, it oxidizes, shrinks and hardens, making it less flexible and more prone to cracking. (Concrete, while harder and generally more expensive than asphalt, has fewer cracking problems.) To the untrained eye, cracks just plain look bad.

To a contractor who specializes in tennis courts, however, certain cracks mean certain things. Some signify a need for resurfacing. Some indicate the court could be renewed using a membrane, stone screening or overlay process. Some must be totally reconstructed.

“To explain the resurfacing vs. reconstruction issue, it’s helpful to go over the basics,” says Lee Murray of Competition Sport Surfaces in Chattanooga, Tenn. “I like to remind the customer that underneath every hard or cushioned tennis court surface is pavement. A serious evaluation of any tennis court surface must include an evaluation of the underlying pavement and the issues that impact that pavement, most importantly drainage and compaction. Problems with the court surface often can be traced to problems in the underlying pavement.” 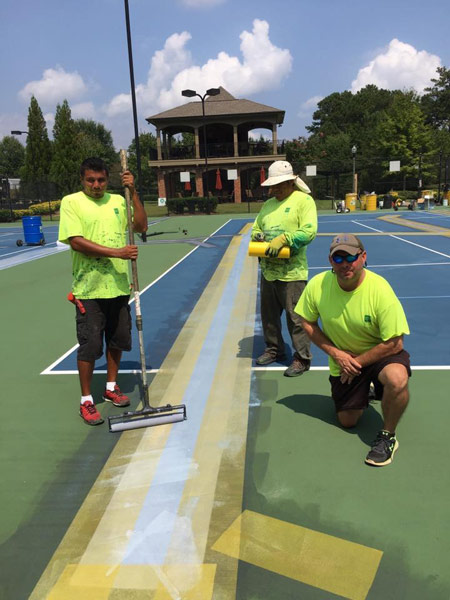 In terms of tennis courts, repair and recoating (also known as resurfacing) is generally the least expensive option. It is normally required during the life of the facility, and addresses the surface of the court, where wear and tear first becomes apparent. “Resurfacing leaves the existing substrate, typically asphalt or concrete, intact,” says Steve Wright of Trans Texas Tennis in Houston. “The existing surface is thoroughly cleaned by pressure washing, cracks are filled — with the understanding that they may reappear or lengthen beyond the current repair — birdbaths are filled, high areas ground down, and new surface coatings are applied over the existing surface. Resurfacing is usually done if the courts drain reasonably well after a rainstorm, the existing coatings may be worn down but are still bonded to the substrate, cracking is relatively minor, and there is no extreme unevenness in the court surface.”

If resurfacing is considered the lower end of tennis court rehab work, then membranes, stone screenings and overlays are the middle level, and may be advisable for badly cracked courts. A geotextile membrane or a layer of stone screenings is laid over the old court, followed by an overlay of asphalt or reinforced concrete, installed in lifts. Finally, the court is recoated. Bob Hale of Halecon in Bridgewater, N.J., calls it “an alternative that falls between simple resurfacing and a total reconstruction.” Matt Hale, also of Halecon, says that the method is less expensive than reconstruction, but more than resurfacing. Essentially, it allows a new court to be built on top of an old base, without having the cracking or instability of the old court mirrored in the new facility.

Like the other options, reconstruction is a multi-step process. To David Marsden of Boston Tennis Court Construction Co. of Hanover, Mass., reconstruction includes pulverizing an asphalt surface, stripping and hauling the surface, examination of the base materials for suitability, application of a new all-weather surface, installation of new net posts, application of acrylic color surface and lines, and fence repairs or replacement. (Growing in popularity is the environmentally friendly technique of recycling asphalt by pulverizing it and mixing it with the existing aggregate, then compacting and leveling it to form a new base). Reconstruction is the more extensive but long-term solution to be used in courts with severe problems. “If a project is in such condition that it needs reconstruction, I would not recommend resurfacing with asphalt or an acrylic coating system. This will only hide the problem temporarily,” notes Herb Osburn of Tennis Courts Inc. in Aylett, Va.

While there are three main approaches to problem hard courts, other options exist. Conversion to a different surface can be accomplished with a modular or a roll-goods product, or a sand-filled turf system. Occasionally, following reconstruction of the sub-base and/or base of a hard court, that court may be converted to clay or fast-dry, or to post-tensioned concrete. Qualified court builders can provide recommendations. 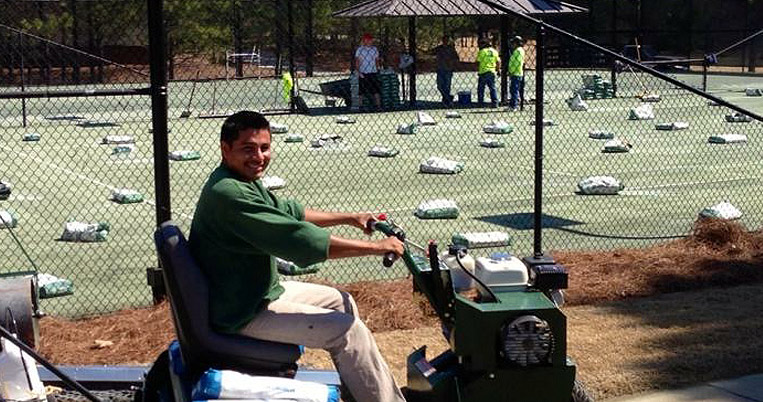 In soft courts (those with clay or a fast-dry surface), a base course of processed stone is installed over a stable sub-base. A leveling course is installed over the base, and a layer of surfacing material (either clay or fast-dry) is spread on top. Regular maintenance (after each match or after three to four hours of play) includes dragging the court with a broom and brushing the playing lines clean. The court needs to be compacted by rolling periodically, and requires at least annual removal of any dried material and replacement with new surfacing, patching of low spots and leveling of high ones.

“Fast-dry courts rarely require total reconstruction,” says Pat Hanssen of Lee Tennis Products in Charlottesville, Va. “Most of the time simple renovation will get the courts up and running as if they were brand new. As long as the base layers remain stable, compactable and porous, there is not any reason they should ever need to be replaced or the court reconstructed.”

However, periodic renovation is inevitable. “Regardless of how diligently you maintain your courts, the surface is going to wear. In fact, from the moment a new court is built, the forces of nature and everyday use are altering its profile. If left unchecked, the results are poor drainage, worn and slippery top surface, bad bounces, and stone screenings popping up from the base below. Hence the need for renovation in the form of surface reconditioning and periodically, a laser lift.” A lift, using a laser grader, re-establishes proper court slope and keeps the surfacing even. Hanssen says laser grading “typically is required every 10 to 15 years.”